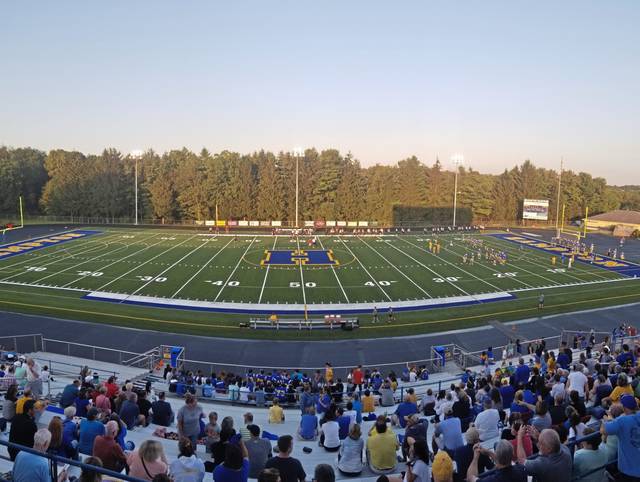 Fox Chapel might have been the best 0-4 team in the conference. Hampton got off to a slow start when the allowed Fox Chapel to score an early touchdown when Lorenzo Jenkins would catch a 4-yard pass from Shane Susnak at the 4:20 mark of the first quarter. Fox Chapel would add to their lead when Alex Wecht would rush for a 3-yard score with 5:33 remaining in the half(PAT was blocked). The Talbots would get the boost they needed when Luke Lindgren would break through Fox Chapel’s defense and run for a 42 yard touchdown to cut the lead in half 13-7 with 5:23 remaining in the 3rd quarter.

The Talbots fought hard throughout the second half but started to run out of gas late in the game. With the Talbots moving right to left having a terrific drive the Talbots inched closer to a probable come back. With just 6:36 remaining Matt Dematteo would lob a 9-yard pass to Gage Galuska in the far right corner of the endzone and put the deficit to 3. But the PAT would fail and the Talbots had 6 ½ minutes to get the ball back and drive down the field down 16-13. Eventually Hampton would get the ball back but deep in their own territory with about a minute to work with. Hampton would get up to their own 40 yard line but that would be all as they wouldn’t be able to convert on 4th down.

Hampton would allow Shane Susnak to complete 14 of 20 passes for 143-yards. Sam Brown would rush the ball 27 times for 104-yards. The Foxes would finish the night with 285-yards of total offense. Luke Lindgren would continue to impress as he would handle the ball 29 times for 166 yards averaging 5.7 yards a carry. Matt Dematteo would complete 3 of 11 passes for 52-yards.

More bad news for the Talbots as Senior QB Ian Andersson would dislocate his right shoulder and not return. (It was determined on September 23rd, 2019 that Andersson would undergo season ending surgery to repair his shoulder after an x-ray revealed that along with a dislocated shoulder there were minor chips in the bone.) Ian would just throw one pass which resulted in an interception. The Talbots have been killed with injuries this season. Ben Horvat is still out from Week 2 when he injured his MCL and is still expected to miss 2 more weeks. Max Smith injured his ACL in Week 3 against North Hills and will miss a significant amount of time. This is Andersson’s 3rd injury this year. In a scrimmage against the Highlands he twisted his right ankle and missed Week 0. In Week 2 Ian strained his hip and would not return against Shaler and was limited to just quarterback play in Week 3.

The Talbots have tremendous faith in Sophomore quarterback Matt Dematteo who has proved he is up to the task. This season Dematteo has completed 39% of his passes for 141 yards, and has thrown a touchdown pass while filling in for Andersson.

Hampton looks to get back on the winning track this week as they will welcome the 1-3 Kiski Cavaliers.