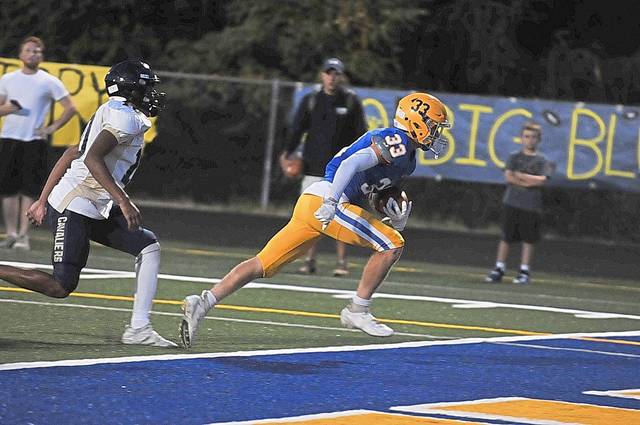 The Hampton Talbots have fallen short of a comeback again, this time to the Kiski Cavaliers.

Hampton would not back down though. 4 minutes into the 2nd half Matt Dematteo would crush a 39-yard field goal to cut into the lead 21-10. Dematteo has been stellar when it comes to kicking field goals this season. Later in the quarter Luke Lindgren would add on to his big season with a 32-yard run with 3:47 remaining in the 3rd quarter to inch closer to a comeback with the score 21-17. But the Talbots would once again fall short of a comeback after Luke Lindgren was stopped short of a 1st down after a game deciding 4th down. Kiski picked up their 2nd conference win and are now tied with the Talbots in the standings.

Hampton’s defense would allow Lebyrn Smith to complete 2 of 4 passes for 22-yards and 1 INT. And would also allow Luke Lander to complete both of his passes for 11-yards. The run game however would be a different story. Kenny Blake would kill the Talbots with his speed rushing the ball 29 times for 181-yards to lead the Cavaliers in rushing yards and 3 TD. Luke Lander would run the ball 6 times for 16-yards in the win. Peyton McCann would add 2 runs for 10-yards. Kiski would end with 202 yards rushing with 33 yards passing to end the night with 235 of total offense.

Offensively for the Talbots Luke Lindgren would add to his huge season ending the night with 31 carries for 193-yards rushing [avg. 6.2 yards a carry] which would be the game high and 1 TD. Lindgren now has 667 yards rushing on the season to lead the team by a mile. The next closet man is Josh Andersson who has 215 on the season. Matt Dematteo would complete 50% of his passes for 57 yards and 1 INT. The Talbots would finish with 256 yards rushing, 57 yards passing to end with 313-yards of total offense.

Another injury for the Talbots as Offensive Lineman Derrick McConnell went down with an MCL tear and possible sprain. Add McConnel to the list of injuries to the skill players… some to mention: Ian Andersson, Max Smith, Ben Horvat, Will Shuit has missed some time with Sean Mclaughlin, Michael Beraducci, and Jayden Resch, and now add Derrick McConnell.

The Talbots have a tough road test ahead of them Friday as they visit the 5-1 Penn Hills Indians.