The Amazing Spider-Man 2 vs Green Lantern: Marvel vs DC at the movies. 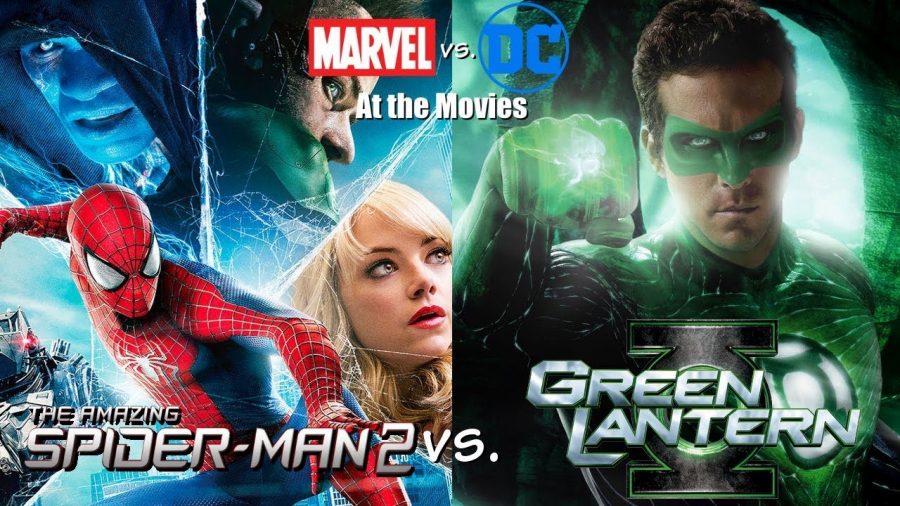 It’s the battle of the Franchise Killers! Two movies meant to launch cinematic universes, but instead fall flat on their faces.

The Amazing Spider-Man 2 killed it’s franchise in 2 movies, while Green Lantern managed to beat that and do it with just one. Which movie is better, and how much do these movies suck? To find out, I am using the same 7-point system I used for my Spider-Man 2 vs The Dark Knight essay, which to recap includes:

Without further ado, let’s get started with this Marvel vs DC At The Movies.

The Story and Themes

Green Lantern most successfully pulls off the theme of overcoming fear. Granted, it does do this very clumsily and in the most obvious way possible, but what we have is solid if a little muddy. The story itself is a fairly typical hero’s journey style of storytelling, in which our hero Hal Jordan resists the call to action until trouble until he is forced into it by Parallax. It has serious issues with the characters, which I will get into later, but from a basic story standpoint, Green Lantern could be worse.

Speaking of worse, there’s The Amazing Spider-Man 2. As far as themes go, this movie is about doing what you want at all times whether it be breaking up with your significant other because you’re an indecisive jerk OR stalking them, also, foreshadowing your own death. I’m pretty sure that’s not the theme, but I watched the movie and I can’t even tell you what the theme was, but it does seem clear that they were going for an obsession vibe to the film, but there is no consistency to it, so it doesn’t count.

To put it short, Green Lantern has some ideas and consistencies, they aren’t well executed ones, but they’re there. The Amazing Spider-Man 2 has NO ideas or consistencies. It just does whatever it wants, whenever it wants, this is an easy point for DC.

Andrew Garfield as Peter Parker/Spider-Man is something that never really worked in The Amazing Spider-Man movies. He’s a good actor, but his Peter just comes off as way to casual in these movies. Sure he builds the web shooters in this incarnation, but is way too cool to be a good Peter Parker. As Spider-Man, they have him joke around with criminals rather than try to stop them, and it doesn’t help that he acts rather smug in these movies and even goes as far as to go to his friend who is dying and tell him he’s not going to help him. Such an awful man.

In Green Lantern, we have Ryan Reynolds as Hal Jordan. A man we are shown as being careless and as a jerk, but that’s the point of his character. He’s supposed to undergo an arc in these movies, however, it still feels rather forced, as there is no buildup to this change. He starts a jerk and is one through most of the movie, but then randomly isn’t one.

Hal Jordan is a jerk, but the movie recognizes it, while Peter Parker is a jerk, and his movies acts like he’s being a hero. This is another point for DC.

In Green Lantern, we have Blake Lively as Carol Ferris, Mark Strong as Sinestro, Tim Robbins as Senator Hammond, Taika Waititi as Tom Kalmaku, and Angela Bassett as Amanda Waller. Aside from Carol and Sinestro, no one has any real impact on the story, and for the most part, the two are really only used to progress Hal’s story, but at least they have a stake in the plot.

In The Amazing Spider-Man 2, we have Emma Stone as Gwen Stacy, Sally Field as Aunt May, Paul Giamatti as The Rhino, Chris Cooper as Guy who needs a nail file, Denis Leary as illusion of Captain Stacy, and Marton Csokas as evil scientist guy. Personally, I like the actors for Amazing Spider-Man 2 more than Green Lantern’s actors. With that out of the way, I can’t even begin to understand the point of most of these characters, as they all range from unmemorable to useless.

Green Lantern doesn’t really seem to know what to do with its supporting characters, while Amazing Spider-Man 2 straight up misuses them, this is another point for DC.

The Genre (Action vs. Sci-fi Action):

The action in Green Lantern may not be all to memorable, but does have it’s moments like the final battle against Parallax, or the training montage near the middle of the film, all of which is fine and is used to tell the story, but in the long run is not very memorable.

Many people have criticized Green Lantern for having bad CGI, but that’s really not the case. It’s actually pretty good for the most part, but it does stick out in some places, like the Green Lantern suit, which was entirely CGI with Ryan Reynolds’s face slapped onto it, so it’s really more of a matter of “Do something right, and nobody cares, but do something wrong, and the whole world watches.”

The Amazing Spider-Man 2 has issues with CGI as well, but for different reasons. While the movie does seamlessly blend CGI and real elements, there is a detach from the story the film is telling and what they are actually showing us. For example, The Green Goblin is not the Green Goblin, but rather a meth-head from what they show us.

The Sounds and Score:

Green Lantern has some neat sound effects for the lantern constructs throughout the movie, like during the training montage for Hal and during much of the action. The score by James Newton Howard is solid, but I feel it would be more memorable if this were a better movie.

The Amazing Spider-Man 2 has some rather obnoxious sounds that resemble dubstep way to much, and as a result can be rather annoying. The score was composed by Hans Zimmer and Junkie XL. I know that they are both good composers, but WHAT HAPPENED HERE? The score was brought down to the most basic level. It’s not bad, but it’s painfully generic.

Green Lantern’s score is fine but not very memorable while Amazing Spider-Man 2’s score is just generic. Point for DC.

Both of these movies have 2 terrible villains. In Green Lantern, we have Peter Sarsgaard as Hector Hammond and Clancy Brown as Parallax. They are a very basic master and servant duo. In Amazing Spider-Man 2, we have Jamie Foxx as Electro and Dane DeHaan as Harry Osborne.

This is by far the hardest category to decide as both of these sets of villains are SO BAD! In the end, I have to give the point to Green Lantern due to how Hector Hammond is meant to be a reflection of Hal Jordan and how Parallax is a reflection of The Green Lantern Corps. Electro and Harry Osborne are just way too bizarre, and so DC gets the last point.

DC wins a clean sweep during this matchup with Green Lantern out of all movies. This is not saying that Green Lantern is good, because it isn’t. It’s just that Amazing Spider-Man 2 is THAT MUCH WORSE! If there is a matchup you want to see next, be sure to write your suggestions in the comments.