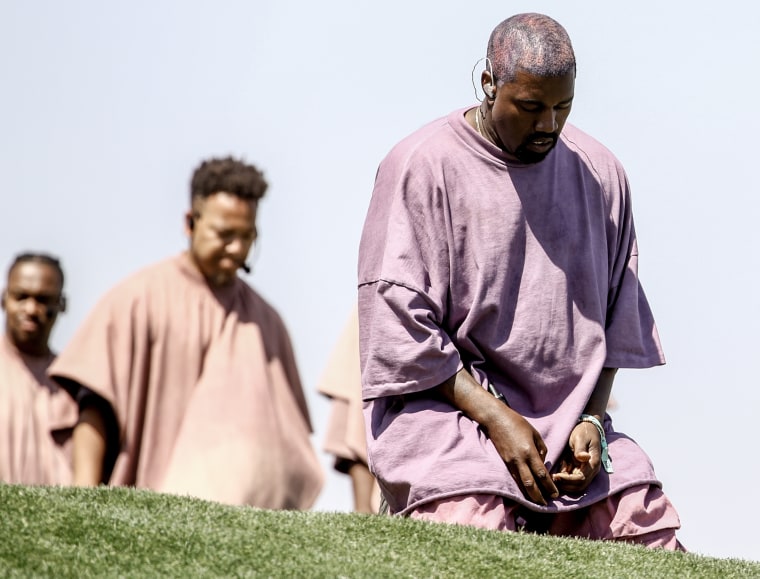 Kanye West may be the most interesting character in the sphere of modern music. He began his career as a producer for Roc-A-Fella records in the mid 1990s. Most notable for producing most of Jay-Z’s records, West also worked with Ludacris, Alicia Keys, and Janet Jackson.

In 2004, he released his debut studio album, The College Dropout, launching West into recognition as a rapper rather than a producer. The album examined themes of religion, materialism, racism, and the value of higher education. In some of the more satirical lines on the most famous song on the album, “Jesus Walks,” West raps about the music industry’s perceptions and views of religion:

They said you can rap about anything except for Jesus

But if I talk about God, my record won’t get played

Not only does West expose traditional rap’s aversion to religious themes, he exhibits his own views on religion with many lyrics, including, “God show me the way because the Devil tryna bring me down.”

Kanye continues exploring themes of religion in his album The Life of Pablo. His song “Ultralight Beam” featured gospel singer Kirk Franklin and his choir. It was nominated for Best Rap Song at the 2017 Grammy Awards. Religion has always been a relevant topic in West’s music.

And now, the epitome of his religious experience is explored in his latest and, ironically, his most controversial album, Jesus is King.  The controversy of this album stems from West’s statement that he would no longer make non-religious music and would only make music with Christian themes. He also called rap music, “the music of the Devil.” This album is completely religious. The opening song, “Every Hour,” is sung by West’s Sunday Service choir. The booming chorus introduces the album and sets the overall tone of the album. The next song, “Selah,” begins with a verse by Ye followed by the singing of the choir.

Overall, the album is very different and also very similar to Kanye West’s past work. The best example of this is exhibited in his song “Follow God.” The beat and rhythm of the song is resemblant of past work but is completely about God. Other songs like “God Is” are not similar to his past work and is completely gospel. It is an interesting turn in Kanye’s career and it will be interesting to see the direction he takes in the future. But is the album good?

I would say yes. Sort of.

There are certain songs that truly put the full musical talent of West on display like his rap ability in “Follow God,” and then his more melodical gospel side in “God Is.” However, other songs like “Closed on Sundays,” ignore the more serious themes discussed in the album and include a more humorous tone. This thematic inconsistency, however, is not surprising when you examine some of West’s past work.

Some question the validity of West’s apparent discovery of religion, believing he has put on a facade in an attempt to garner a larger audience. Even though he has rapped about religion in the past, he has given himself the nickname “Yeezus,” which some Christians have considered blasphemous. He also released a song on his album, Yeezus, simply titled “I Am a God.” When asked in an interview with Rolling Stone about what he meant in the song, he said, “I made that song because I think I am a God.” These people who are skeptical of West’s Christian identity have often cited Matthew 7:15 which reads, “Beware of false prophets, which come to you in sheep’s clothing, but inwardly they are ravening wolves.” Other critics have not liked the album simply because they preferred the “old Kanye.”

Supporters think that it is a good thing that West has embraced a new Christian identity that may spread to the younger supporters of West. One of these supporters is megachurch pastor Joel Osteen, who invited West to perform at his church in Houston. Although he has a questionable past, some Christians consider Kanye redeemed. Redemption is a very prevalent theme in the Christian faith. Kanye responded to Christians who criticize him in the song “Hands On.” He says, “What have you been hearin’ from the Christians?/They’ll be the first one to judge me/Make it feel like nobody love me/Make you feel alone in the dark and you’ll never see the light.”

No matter what your opinion is regarding West or his new album, it is certain that he has shaken up the music world and potentially American pop culture all together. It will be interesting to see how Kanye will develop with this newfound Christian identity.