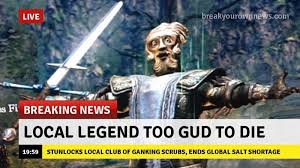 Dark Souls used to be a fantastic game, but the remastered version for PC is full of flaws. Before I tear it apart, let’s focus on the good:

The resolution can be changed now, and runs at a smooth 60 fps.
Many of the particle effects have been reworked or remarkably redone.
Most textures are supposedly uncompressed.
Specularity has been added to most of the game’s materials.
Conveniently, covenants in the game can now be swapped on-the-go at bonfires.
Invasion Priority, a terrible system, has been removed from the game.
The missing textures in the area Lost Izalith have been fixed.
They’ve patched the following bugs:

Unfortunately, as is often the case in life, the good DOES NOT outweigh the…

Though they did finally fix the 60 hertz bug that prevented players with high refresh rate monitors from playing the game, The Priscilla Softlock bug, known quite “lovingly” by the Dark Souls community as “Moan Percent”, has not been fixed. This is a pretty serious game-breaking bug, and if this happens, the only fix is to uninstall and reinstall the game. The fact that this bug remains in the game despite all the documentation on it is just embarrassing, and after releasing the game in an unplayable state, you’d think the developers would notice this. But they haven’t.

Weapon-based matchmaking has been implemented into the game in the most incompetent way humanly possible. There are already a lot of people complaining that it causes issues for them trying to summon or be summoned across worlds for co-op. Also, invaders have already been making builds around this to completely circumvent the system. I won’t go into crazy detail about this, but from what we know now, this is going to cause problems later down the line after the population of the game starts to die down.

The Game speed in Dark Souls Remastered is tied directly to the framerate for some reason. Tying game speed to frame rate has been a bad practice in the industry for a number of years, and for good reason.

All the stuff you can do with cheat engine is back with a vengeance, as well as a new system that softbans innocent players that get invaded by hackers.

Phantom scaling has been implemented in the same broken way as it was in Dark Souls 3. Instead of having your individual stats adjusted, you instead just get a percentage reduction for your health and damage. This is incredibly lazy and just makes co-op less fun.

The post-boss battle grace period has been removed for no apparent reason. I guess they just don’t like players celebrating when a boss is killed.

There are a number of other bugs they failed to fix, and the ones that bug me the most are:

And that’s about it for every bug that I personally know about. If you play Dark Souls Remastered, than tell me if I missed anything, Because I definitely missed some things, this game is so buggy, it’s unreal.

Oh boy, where do I even begin with this. Let’s start with the more literal definition of ugly, and look at some of the “improved” graphics. First, let’s compare the lava in Lost Izalith and the Demonic Ruins. This was the original texture: 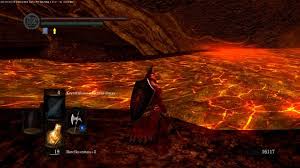 Now take a look at the new texture from the remaster: 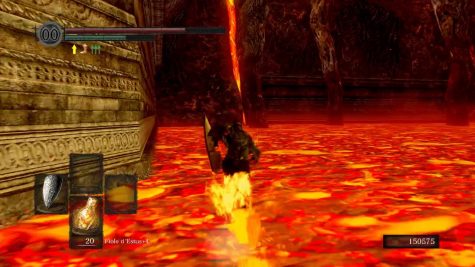 Now, here is a side by side comparison of the original Dark Souls and the Remaster. It’s a bit difficult to tell which is which, isn’t it? 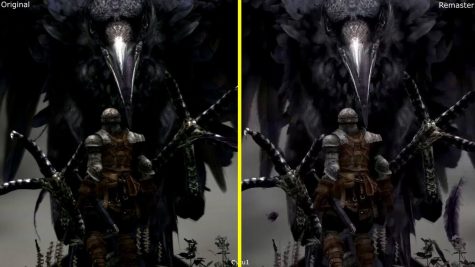 Also, it appears that ankles aren’t real anymore. Take a look at this image of someone performing a dodge roll. More specifically, the ankles. They twist in such inhuman ways that it emits a visceral reaction from people. 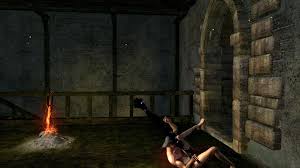 Now with that out of the way, let’s move onto metaphorical ugliness. One thing that I find quite ugly is the invading community. Since this is just the same game as before, everyone already knows what is powerful and what is not. This became really apparent as I was playing this game with my brother. Most invaders are just min-maxing goons out for blood, no fun allowed, chain backstab them over and over.

Another thing I noticed is that they didn’t switch the jump button while sprinting from the B button to L3. This was something that should have been changed, but I guess it would have been too hard. So, yeah.

Also, I said before that it’s good that covenants can now be swapped on the fly. But there is an issue, in which they removed the abandonment penalties for leaving them. They aren’t really covenants anymore, they’re just clubs.

Now instead of seeing what is there, let’s take a look at what isn’t. How about cloth physics for example. I would have been perfectly fine with the game if they at least added in physics to the silver knight capes or swaying of the tuft on the Dragonslayer helmet.

Implementing omni-directional rolling into the game.

Showing the estus flask getting emptier as you use it like in Dark Souls 3. This would have been a super minor change, but they could have done it, it would have only taken them about 2 seconds.

Now I’m going to go over some of the common counter-arguments that people use to defend Dark Souls Remastered, and how I have just proved them wrong about this. I don’t expect to change anyone’s minds, as most people who want to love the game are determined to love the game. Nevertheless, I love making fun of people that say these things, so here we go.

Retort: Oh, they aren’t? Well, didn’t they raise the player count per world? Isn’t that a gameplay change? Oh, it doesn’t count? What about the healing mechanics in multiplayer? Those are definitely different. Oh, they don’t count either? Huh, how very selective of you. You say they aren’t going to make gameplay changes, but they already made gameplay changes. I oftentimes see people make this argument when people bring up putting omni-directional rolling into the game, saying it’s going to make the game easier. Now correct me if I’m wrong, but having 3 friendly phantoms carrying you through the game makes it a lot easier. Things like omni-directional rolling would just make the game more enjoyable, and if you’re crazy enough that you desire 4-directional rolling, try playing the original game with a mouse and keyboard, I dare you.

Retort: This is true, and I said before that the original console versions are generally inferior to the remaster on those platforms. If you haven’t been able to play the original game before, and this is your first chance, then Dark Souls Remastered is a decent purchase. If you have, than just don’t.

Argument: It’s good because it makes the multiplayer active again.

Retort: This is a half truth. Yes, it will make the multiplayer active… temporarily. I don’t expect the high population to last for more than a few more months, due to all the poorly implemented stuff that makes co-op almost impossible and invaders already making builds to twonk the hell out of it.

Argument: This is just a re-release for the current consoles.

Retort: Except it’s not. They’re releasing it on PC as an “improved and definitive” version. They even went so far as to remove the original game from Steam, which I feel pretty insulted about considering the history with the original game. The original game started out in a bad state, with unchangeable resolution, 30fps lock, unusable keyboard and mouse controls that required you to use a controller, and there was never a patch to fix this. Fortunately, modders stepped in and finished the game for FromSoftware. Within 23 minutes of the original games release, a modder had released DSfix, which was essentially the finishing touch to the game, giving it features like changeable resolution and removed the fps lock, allowing the game to run up to 60. However, BandaiNamco, the company that held the rights to Dark Souls, doesn’t like it when their games are modded in any way. So 6 years after the original game’s release, BandaiNamco said “hey, here’s our fix for the game. It’s gonna cost you $40.” So it’s ok to deny your customers basic features to sell those features 6 years down the line? How tragic.

Before I give my final verdict on the game, I would like to thank my brother Josh Van Voorhis for helping with the research into the game, as well as these fellow players of mine:

Is this game worth the price?: ABSOLUTELY NOT! Just stick to the original game and you will thank me. Am I still a salt mine due to this game? Considering the fact that I wrote this article, you probably know the answer. Thanks for putting up with my frustration, and if you disagree with me OR you found something I missed, leave it in the comments for discussion.