The Buzz Around Knives Out *No Spoilers*

In Rian Johnson’s classic whodunnit Knives Out murder combined with a dysfunctional family proves to be what hooks an audience in. The movie’s plot begins when a renowned crime novelist, Harlan Thrombey, dies the night of his 85th birthday. As a result, the well-known Detective Benoit Blanc arrives at his lavish estate to investigate the demise. After interrogating both Harlan’s family and his devoted staff, Blanc must sift through a twisted web of lies, mystery, and red-herrings.

Knives Out has a cast list full of A-list actors and actresses ranging from Captain America to Laurie Strode. Playing Harlan’s son and daughter are Michael Shannon and Jamie Lee Curtis. Playing their children, Harlan’s grandchildren, 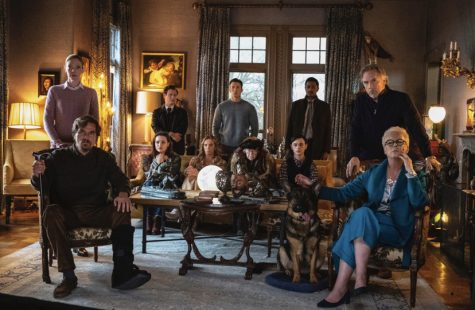 are Chris Evans, Katherine Langford, and Jaeden Martell. The one and only Harlan is portrayed by Christopher Plummer with his staff played by Ana De Armas and Edi Patterson. Lastly, Harlan’s son and daughter in-laws are portrayed by Don Johnson, Toni Collette, and Riki Lindhome. All to be interrogated by local detectives played by Lakeith Stanfield and Noah Segan led by Detective Blanc played by James Bond himself, Daniel Craig.

The movie’s cast isn’t the only thing that has taken audiences by storm. Knives Out has also caused audience members to rave about costume design. More particularly Chris Evans’ costumes. In the movie, Evans’  character, Ransom Drysdale, can be seen wearing an array of sweaters. However, the one sweater that has single-handedly taken over the internet is a white Cable-knit sweater. L.L. Bean’s Twitter page has even tweeted out a link to one of their sweaters, extremely similar to Evans’ 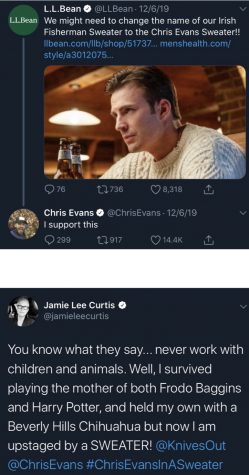 in the movie, saying they should change its name to the “Chris Evans Sweater”. Chris Evans himself then replied to this tweet saying “I support this”. Even Amazon has sold out of multiple brands of white cable-knit sweaters. In addition, the Knives Out Twitter page switched to a Chris Evans Sweaters stan account for a few days before Lions Gate told them to change back to the movie’s account. As a result of all this chaos surrounding Evans’ sweaters, fans of the movie, other big celebrities, and the Knives Out twitter page have begun using the hashtag #ChrisEvansInASweater. Other cast members have also joined in on the sweater fun on Twitter. Recently Jamie Lee Curtis tweeted and stated that though she has an extensive resume, she is being, “upstaged by a SWEATER!” In an interview during the movie’s press tour Chris Evans even revealed that he kept all of his outfits from the movie, and he was recently seen in New York City wearing his characters jacket and sunglasses from the movie.

Knives Out has only been in theaters since Thanksgiving, yet it has already made $162.2 million in box office. In the past few weeks the movie and its ensemble have been nominated for multiple Golden Globes and Critics Choice Awards. Throughout the entire movie the audience is left wondering “whodunit”. Just as the viewer may think they know what’s going to happen, the movie takes a turn and shocks all who are watching. As someone who has seen this movie twice already, I can confirm that it will keep you on the edge of your seat. So, I’d suggest you go see this extremely well-written, Agatha Christie inspired thriller.