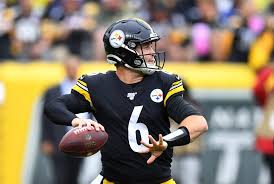 On September 15th, the second game of the regular season, the Pittsburgh Steelers starting quarterback, Ben Roethlisberger, was injured with a right elbow injury during a loss to the Seattle Seahawks.

Next in line was Mason Rudolph the Steelers backup quarterback and third round draft pick in 2018 out of Oklahoma State. Rudolph was a three year starter with pretty decent stats from Oklahoma State, passing for over 13,000 yards in three years and ninety touchdowns. After Roethlisberger sustained this season ending injury Rudolph started week three against the 49’ers with a close loss. Rudolph was then the quarterback starter through the next nine weeks. In week eleven week against the Browns, Rudolph was involved in a fight with Myles Garret, one of the Cleveland Browns elite defensive starters. Garret ripped off Rudolph’s helmet and hit him over the head with it twice after Rudolph chased him down. Garrett and Maurkice Pouncey, a center for the Steelers, were both suspended after the fight. Both teams and all players involved were fined after as well.

In the next game against the Cincinnati Bengals, Rudolph started off slow and was benched during half time. The Steelers third-string quarterback Devlin “Duck” Hodges was then introduced to the Steelers offense and lead the team to a comeback win. Hodges then proceeded to  lead the Steelers to back-to-back wins against the Browns and Arizona Cardinals. Duck is now 3-1 with the Steelers after a rough loss to the Buffalo Bills. Throwing a little over 200 yards and a touchdown, but with four interceptions thrown, Duck looks to improve next game against the New York Jets on the road. Devlin Hodges got his nickname “Duck” due to his 2009  Junior World Duck Calling Contest, and in 2018 he won the Alabama state duck calling championship.

As the regular season begins to wind down, the next two games are crucial for the Steelers to get a wild card spot in the playoffs. Only time will tell to see if Devlin “Duck” Hodges can lead the Steelers to a playoff run.