The Irishman: The Betrayal of Jimmy Hoffa 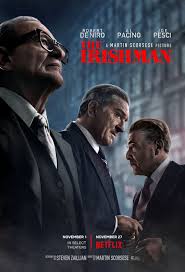 In 1975, the infamous Teamsters Union President Jimmy Hoffa mysteriously vanished. Theories abound about what happened to him, but none have been officially proven in a court of law. One of these theories is based on the confession of mob hitman Frank “The Irishman” Sheeran. A close friend of Russell Bufalino and Jimmy Hoffa, Sheeran worked for the mob and his experiences are detailed in Charles Brandt’s novel I Heard You Paint Houses, recently adapted into the film The Irishman.

The Irishman, directed by film legend Martin Scorsese, tells the story of Sheeran (Robert de Niro), his rise to power in the Teamsters Union as well as the Bufalino Crime Family, and his friendship with Jimmy Hoffa (Al Pacino). Originally a member of the Teamsters Union, he climbed the ranks very quickly, thanks to his friendship with Russell Bufalino (Joe Pesci), head of the Bufalino Crime Family. Bufalino soon introduces Sheeran to Hoffa to act as a muscle for Hoffa. The two become friends and go through many ordeals, like the Kennedy Administration trying to take down Hoffa because of his corrupt methods of gaining power and Hoffa being sent to prison. However, as Hoffa begins to show disrespect to the heads of the mob and the union, Bufalino asks Sheeran to take him out, forcing the titular Irishman to kill one of his best friends and allies.

One of the most interesting aspects of films by Martin Scorsese is his depiction of the rise and fall of criminals. Films like Goodfellas, The Wolf of Wall Street, and The Departed are great examples of this. Goodfellas shows Henry Hill as he grows up in a poor household to become a wealthy and powerful gangster, then eventually lose it all by ratting out his friends and go to a life without those luxuries. The Wolf of Wall Street shows Jordan Belfort transition from a naive broker on Wall Street to a rich, drug-fueled scammer who eventually loses it all. The Irishman shows a similar path with the arc of Frank Sheeran.

Sheeran becomes a powerful member of the mob and the union, but the film shows how all of the success that he enjoyed all becomes temporary. Although in his most successful days he is shown to be powerful and influential over the mob and the union, at the end he is old, alone, and alienated by his daughter, Peggy (Anna Paquin). In a nursing home, old Sheeran lives in a world where he is the last one standing of his former mob allies. The same could be said for the arc of Hoffa. He starts off as one of the most influential men in American culture but then goes to prison, loses control of his union, and then gets betrayed by a man he once called his friend.

This film has been very controversial for some reasons. One of them is that there is evidence which refutes the claim that Frank Sheeran assassinated Jimmy Hoffa: DNA testing done on the blood found in the house Sheeran claimed Hoffa was killed in showed DNA that did not match that of Hoffa’s.

However, I don’t believe historical accuracy was the main goal Scorsese was trying to accomplish. After all, there have been numerous films that twist history in order to create an interesting narrative. Tarantino’s Inglourious Basterds and Once Upon a Time in Hollywood are famous for changing history, but it’s not the historical accuracy that matters. It’s how they utilized the historical setting to create an interesting narrative.

The historical events mentioned in The Irishman relate to the central themes of the story. One prime example is the Kennedy assassination. The Bufalinos wanted Kennedy to get elected president because he promised to get Castro and the communists out of Cuba, which would allow for the mob to re-open their casinos in Havana. However, after the failure of the Bay of Pigs invasion, they wanted him out of office. Later, when Bufalino asks Sheeran to convince Hoffa to stop running for president of the union, he says that the mob could kill Hoffa if he does not listen to their demands. “If they can knock of a president, they can knock off the president of a union,” Bufalino says, insinuating the conspiracy theory that the mob assassinated President Kennedy. If Scorsese truly believes that the mob was responsible for killing Kennedy is up in the air, but once again, his suggestion connects to a central theme of the story: betrayal. The same happens with Sheeran when he kills Hoffa, a man who once called Sheeran a friend.

Whatever your beliefs are on the disappearance of Jimmy Hoffa, The Irishman is an incredibly well-made film about betrayal, friendship, and the cost of all of these things. Scorsese once again does not disappoint with one of the best films of the year and most likely the decade. The film has received five Golden Globe nominations, including Best Motion Picture-Drama, two Best Supporting Actor nominations for both Pesci and Pacino respectively, Best Screenplay for screenwriter Steve Zaillian, and Best Director for Martin Scorsese and to be frank, it deserves every accolade it gets.