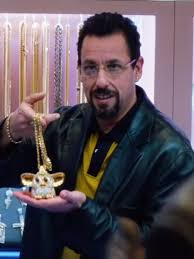 Josh and Benny Safdie are only 35 and 33 respectively, and they have already created two of the best films of the past decade. In 2017, they released Good Time, an adrenaline-fueled story about a lowlife who goes on an odyssey across Long Island to find money to bail out his mentally disabled brother from Rikers Island Prison. It was a masterpiece to say the least. Your heart never beats at a steady pace while watching that film. You’re always on the edge of your seat, as they brilliantly execute scenes rife with tension and fear. Twists and turns pull the story in a direction you could never imagine.

Uncut Gems, the new film by the Safdie Brothers, does more of this. It takes place in 2012 and tells the story of Howard Ratner (Adam Sandler), a Jewish jeweler in Manhattan’s Diamond District who racks up a large amount of debt. He plans to pay off these debts by making incredibly high-risk gambles on basketball games. One in particular revolves around the now-retired Celtics forward Kevin Garnett (played by himself) in a playoff series. The film revolves around Ratner being chased around town trying to solve all of his debt and also trying to patch issues with his family along the way.

I love the style the Safdie Brothers use in their films, a style they maintain in Uncut Gems. The pace of the story is like a Lamborghini driving at top speed down an empty highway. It’s exhilarating. The characters are constantly yelling and fighting one another, and though the film is cut so fast, it lingers on the feelings that result from these altercations. When Ratner gets punched by a thug working for a collector, it’s not a textbook movie sound. You FEEL the punch. The sound design in this film is great. The cinematography is a combination of wide shots of cars cruising through the city of New York, bright neons painting a vibrant picture, and uncomfortable close-ups that keep the viewer constantly on-edge and uncomfortable. The vibrant synth score by Daniel Lopatin, also known as Oneohtrix Point Never who composed the Good Time  score, is phenomenal as well. It establishes the wide range of pace that exists throughout the film.

I am going to say something I don’t say often about films. Adam Sandler is amazing. He gives a brutal and real performance of a man trying to patch his life together but doing so through the worst ways possible. He is a desperate man. A man trying to keep his family together while constantly being chased around by collectors. Many often make fun of Sandler because of the low-class and trashy comedies he stars in. However, he crushes that stereotype in this film.

Overall, Uncut Gems is one of the best of 2019 and the past decade. The Safdie Brothers once again create a masterpiece for the screen. I cannot recommend this film enough.