Hampton Football Moves from 5A to 4A 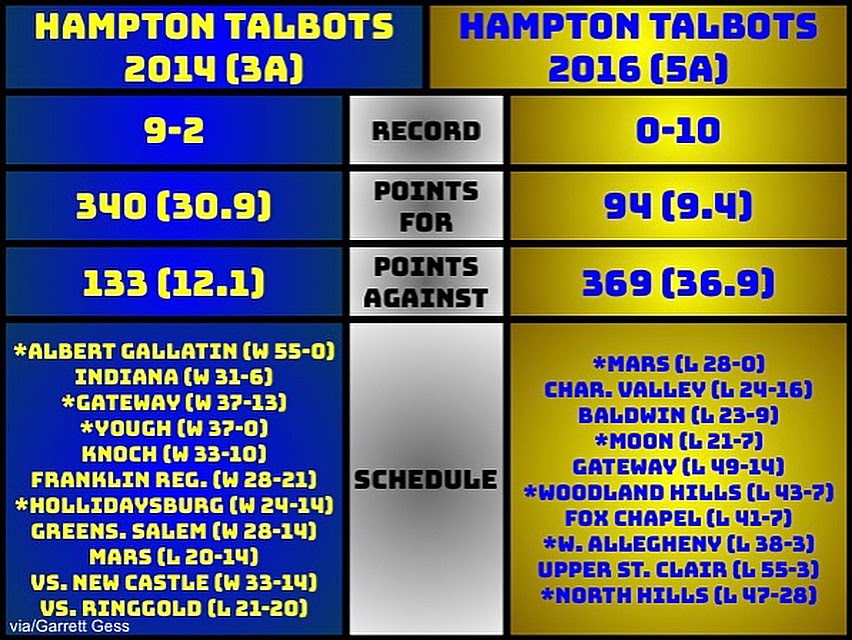 There’s a change in the Hampton Football Program, and it’s not just the 10-game schedule moving down to 7 in response to COVID-19. Hampton Football will move from its prior 5A classification down to 4A. This means competing with different teams in addition to still playing area rivals such as Fox Chapel, Shaler, and Mars, the latter of whom has also gone down a classification. Unfortunately, Hampton lost their first conference game against Mars last Friday, but that doesn’t mean there isn’t hope on the horizon.

After Hampton brought in the young Greg Mihalik to head coach starting in 1998, the Talbots went off running. In 2001, the Talbots went a perfect 9-0 in the regular season, having their best season yet. The Talbots’ only loss was in the playoffs to West Allegheny who would later win the State Title that year. In 2004, the Talbots went 8-3 and played a tough game against highly favored West Allegheny in the quarterfinals, losing by a score of 52-42; almost achieving revenge. In 2005, Hampton almost pulled off another undefeated regular season, their only loss that regular season came from Pine-Richland by a score of 43-42. That year playing at home, Hampton was 5-0 and had a whopping 44.6 to 5.4 average point differential. After two down years in 2007 and 2008, Hampton still had some unfinished business before the 2000s would go out. That unfinished business was making it to the semifinals as Hampton was 0-8 in the quarterfinals.

In 2009, Hampton had a 5-4 regular-season record and nothing special seemed on the horizon. Head coach Jacque DeMatteo didn’t let Hampton’s #14 seed stop the Talbots from upsetting #3 Chartiers Valley and then #6 Uniontown en route to the semifinals, losing to Hopewell by a score of 31-9. Hampton was one game shy of playing at Heinz Field for the WPIAL Title but still made up the Final 32 teams in the Statewide Bracket. The Hampton Football Program looked like it was slowly declining through the early-2010s but the Talbots in 2014 proved otherwise. Hampton finished with a 9-2 record and almost got past the quarterfinals again, losing to Ringgold in a close game of 21-20. The next year in 2015, Hampton started off 5-0 but couldn’t get hot late in the season, only finishing 7-4 and ending the season in a lopsided playoff loss to Central Valley. Getting far in the playoffs was always realistic for Hampton while in 3A. But when Hampton moved up to 5A after the PIAA restructured the classes for a 4A → 6A scale, those playoff realities for Hampton were starting to fade.

In 2016, Hampton would go 0-10 as a result of the switch. Hampton would have to face top football programs like Penn Hills, Gateway, Woodland Hills, Penn-Trafford, and North Hills on a regular basis. In a January TribLive report, Head Coach Jacque DeMatteo cited team sizes as a big drawback. “When you’re facing a 70-to-80-man roster, and you have 35 to 45, that’s not cutting it.” Hampton went 6-34 in 5A from 2016 to 2019.

The move down to 4A will hopefully bring better success for Hampton moving forward. For 2020 and on, Hampton Football will face more similar-sized opponents, a change that may likely bring back the successes of 2014.