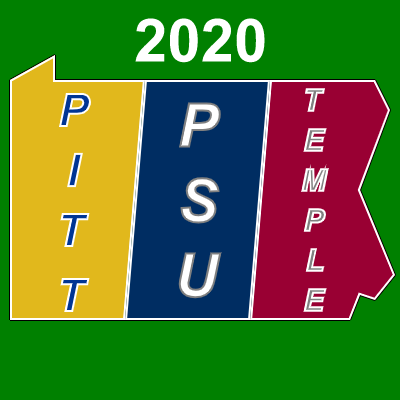 The College Football season is coming to an end, so here is a look back at how the teams of Pennsylvania have fared.

Pittsburgh Panthers: Coming off of a few mediocre seasons in years past, Pitt felt deserving of moving on to a major bowl game in 2020. From the start, these expectations were looking good as Pitt started 3-0 and peaked at #21 in the country. In their next game on October 3, the Panthers would be upset at home by NC State with a losing score of 30-29, despite being 14-point favorites coming into the game. On October 10, Pitt would lose another close game with a similar score of 31-30, by being defeated at Boston College in overtime. Pitt would then face #13 Miami and #3 Notre Dame, losing in both games. Pitt found a slight rebound by beating Florida State and then Virginia Tech in blowout games. Most recently, Pitt headed down to #3 Clemson and was defeated by a score of 52-17. This Thursday, Pitt will face Georgia Tech in Atlanta, GA with their hopes of making it back to a bowl game with a 4-4 record currently.

Penn State Nittany Lions: Ever since Penn State’s breakout season in 2016, they’ve always had hopes of reaching the College Football Playoff with the Top 4 teams in the nation. Penn State opened their season as #8 in the country but lost an overtime heartbreaker 36-35 OT at Indiana to start the season. It didn’t get easier as Penn State would host #3 Ohio State in the next game and lose 38-25. The Nittany Lions would later cap off their first 5 games with a majorly disappointing 0-5 record. In their next game, Penn State still found some merriment by defeating Michigan at Ann Arbor for the first time since 2009; losing in all 3 previous meetings at Michigan. Penn State would then win on the road against Rutgers to now stand at 2-5. Penn State will finish up their season by playing Michigan State at home for the Land Grant Trophy this Saturday. Being able to win their last 3 games and finish 3-5 is one way that Penn State can somehow salvage their season.

Temple Owls: 5 years ago, Temple had the best college football team in the state of Pennsylvania and defeated Penn State for the first time in 38 previous meetings since 1941. In 2015, Temple started the season 7-0 and hosted College Gameday for their only time with #9 Notre Dame at #21 Temple on Halloween in Philadelphia, PA. Today in 2020, Temple has been borderline awful and a complete reverse of their historic season in 2015. Except for the Owl’s first two games this season, they have lost by more than one possession in all 5 other games. Temple even barely got by South Flordia 39-37 on October 17 who is 0-7 in conference play. Without that close win, Temple would’ve been winless their entire season. All in all, Temple finished the season 1-7 and had their last game vs. #7 Cincinnati canceled due to COVID-19.