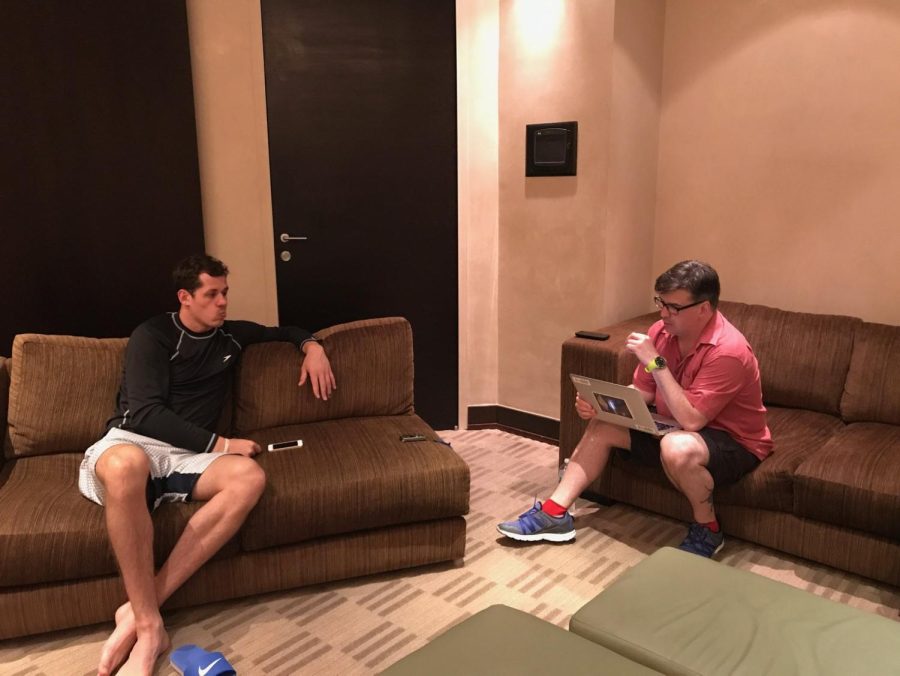 I had the opportunity to interview Rob Rossi via email. Rob Rossi is senior writer for The Athletic, which covers Pittsburgh sports. He was previously a reporter on the Penguins and Pirates. He has written articles on athletes’ charities and concussion protocol and is now working on Evgeni Malkin’s authorized biography. He stayed with Evgeni Malkin to get a first hand look at his personal life. I asked him different questions throughout the interview to get a look into how he grew to love writing for sports.

Rob went to WVU and graduated with a major in Journalism and a minor in English. He was 3 classes short when he left in 2000, after being offered a two-year contract with the Pittsburgh Post Gazette and the Trib. So he finished his schooling at Ohio University, where he wrote for the school newspaper and learned his skills under Bob Hertzel, one of his mentors.

Immediately I asked, “How did you first come about wanting to write about sports rather than something else?”

Rob responded by talking about his experience with a mentor, Alan Robinson. Rob was a big local fan of our own Pittsburgh Penguins and Pittsburgh Pirates.

He said, “But from 1992-95, the Pirates, Penguins and Steelers each lost playoff games that crushed me.” Rob explained that Alan Robison taught him to “emotionally disconnect from being a fan so I could be a more objective reporter.” This helped him become more unbiased and less invested in the actual game.

Rob also explained how the game of winning and losing is not what actually interests him. “What happens away from those games — the behind the scenes, the daily drama, the personalities — is to which I’m drawn,” Rossi remarks. Rob initially chose hockey, not for the sport, but for “the opportunity NHL provides me to do my work with fewest institutional obstacles.”

My next question was “did you find the Pens or did the Pens find you?”

He answered that reporters answer to beats and to the editors, not the teams. Rob initially wanted to cover the Penguins to take on Sidney Crosby as a challenge for his next article at the time. So yes and no; he chose them, but he was also assigned to a certain team by his editor.

As most people have their own special places where their work can be completed, so does Rob! He said, “My preference is to have a chair and a table.” He usually writes “from a spot on the media level or media room at an arena or practice rink.”

With a great job like this comes the opportunity to meet new people. Rob has met 3 presidents: Barack Obama, George W. Bush, and Bill Clinton!  I asked him if he’d ever been starstruck, but he explained that Bob Hertzel had taught him to “let the people I cover think they’re better than you and to treat them with only as much respect as you are given.”

“I don’t get starstruck,” he added.

In addition to the presidents, the other huge star he met was Bruce Springsteen. Although the only celebrity he had met that left him silent was Mick Jagger. “Only Jagger left me speechless,” he said.

Last but not least, everyone needs their time away from work or school. I asked Rob, “What do you like to do in your free time? Do you have any hobbies?”

He responded, “I do like to spend time alone when not working. I’ve recently taken up gardening. I exercise. Also, I work on my mental health.” Rob also enjoys learning new things. He is currently taking singing lessons and is trying to improve on the guitar. Most importantly, he tries to spend time with his goddaughter, Mary Grace.