Downtown Decimation, The Case of the Yablonski Murders

We're all no strange to, well, questionable organizations within our radars. Doesn't matter who or what; when they do something, we'll know. But just how far does this sketchy business reputation stretch back in history? 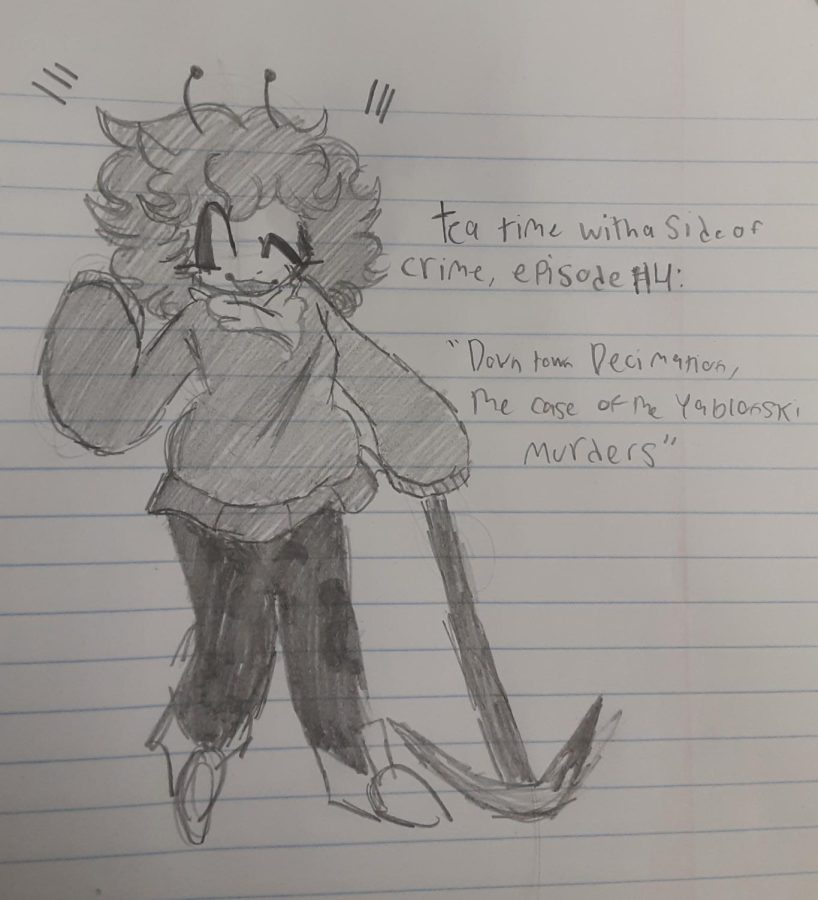 Salutations Hampton, and welcome back to Tea Time with a Side of Crime! Episode #4 baby, let’s go! We’ve made it to 2022, and I couldn’t be more proud of everybody. As a community, we’ve been through two insane years, and I hope that this year turns out to be worth the wait.

In honour of the new year, I’m happy to announce that this is the first fan-submitted case that I’m covering! The individual wished to remain anonymous, which I’ll respect, and they chose a case that happened here in Pittsburgh; we’re getting local this time! Strap up, dear reader, and grab your riot signs, because in today’s episode, we’re covering the infamous Yablonski murders.

My knowledge of this case was minimal in comparison to the cases I’ve covered previously, and whenever I learned that the victims of the case were fellow Poles, I felt the obligation to do the Yablonski family justice. Their unfortunate deaths were as a result of the father of the family, Joseph “Jock” Yablonski, and his involvement with the miner unions formed during the Pittsburgh Industrial Revolution. As someone whose ancestors were Polish immigrants to Pittsburgh during the peak of the steel industry, it’s almost like this case was begging for me to cover it, thus today’s episode.

As is the new tradition for Tea Time with a Side of Crime, it’s time for our guest interview segment! Introducing our guest, my fellow ukulele-man, Vestia Oreszczyn ’24!

Q: “What knowledge do you have on Pittsburgh’s history with worker unions?”

A: “Not much. I know that there was stuff with the Industrial Revolution, but I know that Pittsburgh was big on steel and that nobody could see in Pittsburgh because of the smoke.”

II: Who was Joseph Yablonski?

In order to understand the importance of Jock Yablonski, it’s best to have an understanding of the work that he did to help the worker unions in and around Pittsburgh, as what Yablonski attempted to do started up some of the biggest worker strikes the East coast has ever seen. Ever since he was a young boy during the Roaring 20’s, Yablonski lived in the coal mining industry. His own father was in the industry before he died in a work-correlated accident in the 1930’s. In order to support his family, Yablonski dropped out of school when he was in the eighth grade and began working in the coal mines. It was there that he witnessed the harsh labour conditions brought on by the coal mines; damaged lungs due to over exposure to coal dust, cramped working spaces, and not to mention the constant risk of workplace accidents. The passing of his father inspired Yablonski to become active in the United Mine Workers of America, better known as the UMWA, and was elected into the union in 1934. He lacked the proper education, but his wife, Margaret Yablonski, had the writing prowess to help his career progress.

Yablonski gave fiery speeches about the philosophy and goals of the labourers working in the coal mines. His presence in Pennsylvania politics was ever looming since the early 1950’s. Ever since his father died in that mining accident back in 1933, safety for miners was Yablonski’s top priority. A majority of the founders of the UMWA were growing old and gray, including the retiring John L. Lewis, who had spent more than 40 years as president of the UMWA. The fiery and determined Yablonski caught the attention of Lewis, who gave Jock the plan of a lifetime. First, run for executive board in 1941. Second, run for president of the district encompassing his home region of Pennsylvania the following year.

Yablonski wasn’t given this plan by Lewis just because he liked the guy, no, it’s because Yablonski got stuff done. In 1954, he created Centerville Clinics Inc., a corporation that miners and their families access to health care, as many of them couldn’t afford it. By 1958, Yablonski’s hard work was beginning to pay off once he became President of UMWA District 5, located mostly in southwestern PA.

Lewis retired in 1960, only to be replaced by Thomas Kennedy. His vice president was the one really pulling the strings though, one Tony Boyle, who clashed with Yablonski almost immediately. Kennedy was getting up there in years, and as his health began to decline, a majority of his duties were taken over by Boyle. Upon Kenndy’s unfortunate passing in 1963, there was mass confusion as to who would be president; Yablonski or Boyle? The debate was broken by Lewis himself, placing Boyle in the president’s chair. TribLive posted an article detailing the life of Yablonski up until his death, even interviewing his own son Chip Yablonski, who said this: “When Lewis was president, there were lots of things that could have been done in the area of mine safety and other benefits that were not achieved, and Boyle stepped into Lewis’ shoes and did essentially the same thing.”

Boyle’s new control over the UMWA was met with opposition via some of his odd, often horrid behaviors. Boyle would often blow money on insignificant things or events, and he allegedly seemed to be finding high-paying union jobs for his family members. A group of District 19 miners located in Miami were even reported to be physically assaulting anti-Boyle speakers. Yablonski was right there in the shadows, an unlikely revolutionary. Even as he was in his 50’s, he kept a low profile, but didn’t choose to ignore the scandals that Boyle managed to shirk in the past. This all came to a head when, in 1965, Boyle removed Yablonski from his position as president of District 5.

Q: “Why would Boyle choose to have Yablonski removed from his position?”

A: “There was a whole lot of tension between the two, and it wasn’t really the best environment. He had so much power and kept knocking people down pegs. Bad relationships, bad people, etc.”

It was New Year’s Eve. The year? 1969. Yablonski’s son Chip tried to call him, but there was no answer.

Chip Yablonski, alongside his brother Ken, rushed to their father’s house out of fear of something possibly happening to him. Perhaps those District 19 “goons,” as Chip put it in an interview with Vince Guerreri for the Smithsonian magazine, did something. After all, they did have a history with beating up those who didn’t support Boyle. As Yablonski was a longtime enemy of Boyle, it only makes sense that he was a prime target on their metaphorical hitlist. That would be proven factual as whenever the two boys arrived at their father’s estate, the sight was gruesome.

Picture this: Joseph “Jock” Yablonski, his wife Margaret Yablonski, and their twenty-five year old daughter Charlotte Yablonski were all found dead in the house. All three of them had varying numbers of gunshot wounds. Both cars in the driveway had their tires slashed, and the phone lines to the house were cut.

The case’s origins are pretty cut-and-dry considering the history between Yablonski and Boyle. Within a month, federal investigators discovered the embezzlement to pay for the assassins. A pad in Yablonski home had an Ohio license plate on it, which allowed them to detain the assassins in Cleveland. After the murders had taken place, Albert Pass, a Boyle loyalist and president of District 19, and said, “Yablonski ought to be killed or done away with.” Shortly thereafter, District 19 received $20,000 for a “research fund” from the union. Convenient, isn’t it?

Thankfully, this sorrowful tale has a happy ending. Boyle was taken into custody in 1973 while he was being deposed in a related civil lawsuit by Yablonski’s own son, Chip.  By then, Boyle had already been convicted of embezzlement, and the following year, he was convicted of murder, one of the nine people to go to prison for the Yablonski killings. It was Boyle’s arrest and sentencing that sparked the call for serious reform within the UMWA, as to prevent another Yablonski vs. Boyle type situation.

Q: “What would be the best action for the UMWA to take after Boyle’s sentencing?”

A: “They’d have to find a new president, get someone to watch over affairs and without any bad relationships, mainly just reforming management and the like.”

Corrupt corporations will always be a nuisance to society, no matter the time and place, and it hurts to see that such a big scandal happened right here around Pittsburgh. The Yablonski family thankfully received closure for the death of Joseph via Boyle’s arrest, but that begs the question, “Could Yablonski’s death have been preventable?” It’s certainly up to debate, that’s for sure, and I implore you to ponder this question.

At the top of this episode, I mentioned how this one was fan-submitted, and I want to extend that possibility to all of my readers (I see you guys! Thanks for the support of my series!). If you have a PA true crime case you’d like to see in Episode #5, feel free to shoot me an email at [email protected] I’d love to see what cases you have in store for me! But, until then:

This has been Tea Time with a Side of Crime, where Pennsylvania’s most gruesome tales are served with a complementary cup of tea. Thanks for reading.