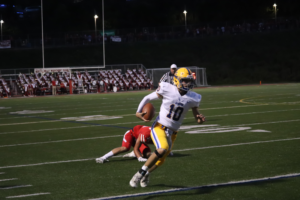 The Hampton Talbots fall to the North Hills Indians in one of the most important games of the season.

Talbots got off to a slow start both on offense and on defense. The Indians scored an early touchdown thanks to a Chase Foskey 23-yard run. The Indians maintained the lead until the second quarter when Tommy McDonough scored from the 2-yard line to increase the Indian lead to 14-0 heading into halftime. The Talbots would finally get on the board mid-way through the 4th quarter when Michael Berarducci caught a 28-yard pass from Ian Andersson to cut the North Hills lead in half 14-7. But the Indians kept going strong and quickly brought the lead back up to 14 when QB Dylan Pawling ran for 56 yard touchdown run.

Soon after, the Indians would increase their lead to 28-7 when Dylan Pawling would run for a 56-yard touchdown. The Talbots still wouldn’t go away when Gage Galuska would grab a 39-yard touchdown pass from Ian Andersson to cut the lead in half again 28-14 late in the game. But Chase Foskey would secure the win for the Indians as he would run for 32-yard run in the final minutes of the game. More injuries piling up for the Talbots as Max Smith would exit with an ACL injury. Smith would finish the night with 5 carries for 19 yards.

Luke Lindgren would carry the ball just 8 times for 53 yards. Ian Andersson would complete 5 of his 10 yards, rush 7 times for 16 yards, throw 2 TDs and 1 Int. Michael Berarducci and Gage Gulska would score both Talbot touchdowns. The Talbots would be held to 235 yards of total offense.

The Talbots fall to second place in the Class 5A Northern Conference and will host the winless Fox Chapel Foxes on Friday September 20th.